Vaping and E-Cigarettes Within the Evolving Tobacco Quitline Landscape

This article summarizes the vaping research literature as it pertains to tobacco quitlines and describes vaping assessment, treatment, and evaluation quitline practices. It also presents 2014−2018 registration data (vaping in the past 30 days, number of use days, use for quitting smoking, and intentions to quit vaping) from 24 public quitlines (23 states and District of Columbia) and 110,295 enrollees to employer-sponsored quitlines. Trends in vaping rates over time, by state, and by age group are described.

This paper outlines research and evaluation priorities to inform the future quitline treatment landscape with respect to vaping. The quitline community is positioned to increase the likelihood that vaping has a positive impact for adults who smoke through harm reduction or supporting cessation and has opportunities to expand impacts on youth and young adult vaping prevention and cessation.

Vaping and E-Cigarettes Within the Evolving Tobacco Quitline Landscape

In Illinois, underage drinking was identified as a significant issue as early as 2004 through an assessment process conducted by the State Epidemiological Outcomes Workgroup (SEOW). It has continued to be a significant issue for the state through subsequent assessments in 2008 and 2012. Illinois was awarded the SPF-PFS grant in October of 2014 through a grant application submitted by the Illinois Department of Human Services (IDHS).

The SPF-PFS grant provided an opportunity to identify and fund sub-recipient communities throughout Illinois to utilize the SPF model (shown below) to target the most pressing contributing factors to underage drinking using a mix of evidence-based programs, policies and practices based on their local cultural context. 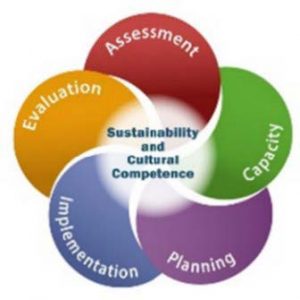 The SPF-PFS project officially concluded activities on September 29, 2019 after five years of funding. Five sites were granted continuation funding through June 30, 2020. These reports are the final reports from this project.

A PDF of this report :

SEOW Members Crystal Reinhart, Doug Smith and others in the School of Social Work at UIUC recently published an article on youth opioid use based on data from the Illinois Youth Survey. Here is the citation and the abstract:

Background: Although rates of nonmedical opioid use are highest in late adolescence and emerging adulthood, efforts to understand the extent of the heterogeneity in opioid misuse during this time have been limited. The current study aimed to derive and define typologies of opioid use in high school students at the onset of emerging adulthood.
Methods: Survey responses from a statewide sample of high school students aged 18 and 19 (N = 26,223) were analyzed. Group-based comparisons between participants reporting opioid use and those not reporting opioid use
were conducted. Among those reporting opioid use (n = 1,636), we conducted a latent class analysis (LCA) to identify heterogeneous subgroups of opioid users on the basis of non-medical use of prescription opioids (NMUPO) and heroin use. The resulting classes were then compared across various risk and protective factors using multinominal logistic regression.
Results: Consistent differences were observed between participants using opioids and participants not using opioids, with moderate to large effect sizes. Results from LCA revealed three subclasses: NMUPO-Any Use, NMUPO To Get High, and Heroin Use. Subclass differences were observed for non-opioid substance use, mental health, and demographics.
Conclusions: Findings from this study underscore the variability of youth who engage in opioid use in late adolescence. Results also indicate that opioid use during adolescence is likely indicative of a broader set of substance use and mental health issues.

CPRD has recently released “Strata Reports” that report the frequencies for all variables covered in the Illinois Youth Survey for Illinois youth in 8th, 10th and 12th grades living in urban, suburban and rural areas.  CPRD was unable to produce the strata report for the City of Chicago that is typically released due to an inadequate sample size. CPRD was also unable to produce an overall statewide report also due to sample size limitations resulting from the Covid-19 pandemic.

Reported data tables in each strata report are divided into six areas:

The Medicaid 1115 Substance Use Disorder Demonstration waiver will introduce a limited piloting of certain services that are currently not directly available to Illinois Medicaid beneficiaries. These additional services are expected to inform the state’s efforts to transform the behavioral health system in Illinois as some beneficiaries will have access to less costly community-based services, which are expected to help beneficiaries improve their health and avoid costlier services provided in an institution.  The demonstration period is July 1, 2018 through June 30, 2023 and includes 10 pilots addressing inpatient treatment, clinically managed withdrawal, case management, peer recovery support, crisis intervention, home visiting, community integration, supported employment, intensive in-home, and respite services. The project has six goals:

The Center for Prevention Research and Development (CPRD) will be conducting an overall evaluation of these pilot services using Interrupted Time Series to compare trend data pre- and post-wavier and individual pilot evaluations using Propensity Score Matching analyses to compare groups. The evaluation will be conducted in partnership with the Office of Medicaid Innovation at the University of Illinois and funded by the Illinois Department of Healthcare and Family Services.

Our next quarterly meeting of the Statewide Epidemiological Outcomes Workgroup will be Thursday, April 22nd from 2:30 to 3:30pm.

We’ll be getting updates regarding substance use data, newly released studies, and new data resources from around the state. We’ll also continue our  discussions about moving forward as we look toward the next state fiscal year beginning in July, 2021!

Current members have been sent a meeting invite via WebEx from Vanessa Villa at the IL Department of Human Services.

If you’re interested in membership and/or participating in our meeting, please contact SEOW Chair Scott Hays at sphays[at]illinois[dot]edu

Hope to see everyone soon!

This is to announce that the 2019 Illinois Pregnancy Risk Assessment Monitoring System (PRAMS) detailed data tables were just posted to the IDPH website. This is the fourth year of data collection using the Phase 8 version of the PRAMS survey.

The 2019 results are available by clicking the green “Select a year” button in the middle of the page available at http://dph.illinois.gov/data-statistics/prams.  On the 2019 results landing page, a comprehensive set of charts is provided in the “2019 Illinois PRAMS Detailed Data Tables” link. There also are chart-specific hyperlinks allowing you to see the available charts and to view them individually.

As always, I am interested in your feedback on the data tables. I also am interested in knowing if you use the PRAMS data for education purposes, or for program or policy development that could be highlighted in a Data to Action report to the CDC. Please feel free to e-mail or call with your comments and feedback.

Thank you for your support of the PRAMS program!